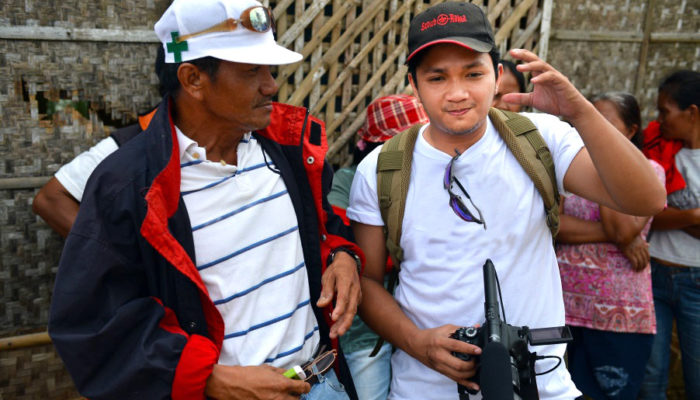 as told to Joshua Kho

This is the story of two men: Moses and Moshe Aranas.

Moshe Aranas works at the Department of Environment and Natural Resources in Iloilo. His siblings are succeeding in their studies, and their whole family serves in their church. But, several years ago, it was a different story; Moses, their father, was addicted to drugs.
Moshe’s father, Moses Aranas, used all kinds of drugs in high school but he became a Christian when he met the woman who became his wife. When their son was born, Moses named him Moshe after himself.

Moses became a pastor, but when Moshe was in elementary school, Moses tried drugs again. Moses quarreled constantly with his wife and the whole family was affected. Finally, they separated. Everyone witnessed how the family crumbled.

Moshe, as oldest, was forced to shoulder all the responsibilities that should have belonged to his father. Hatred consumed him so much that he wanted to hire an assassin to kill his father.
In the meantime, Moses was desperate. He sold property that did not belong to him. He lied to a lot of people. Moshe’s uncle Rey reached out to Moses and offered to put him in a drug rehabilitation program in Cebu. Moses went, but didn’t finish the program.

At this point, Moshe had had enough. He didn’t care about his father any more. He had a good paying job and could support his mother and his siblings. He thought everything would be okay, but he found out he was wrong. According to him, “Hatred always haunts you.”

Let’s dive right into the interview with Moshe.

When your father was using drugs what was your relationship like?

“Of course it was negative. When I was still a child, we were close. In fact, he was my best friend. Those were the good times. When he got involved in drugs our wonderful relationship disintegrated.”
How did drug addiction change your father’s behavior?

“What I discovered is that even though you regularly attend church, everyone is susceptible to temptation. When I was in elementary school, I could smell cigarette smoke inside our bathroom. I knew that my father was a minister in our church. So how could I believe a preacher, who preached the Word of God, but deliberately continued his tobacco addiction? It felt like hypocrisy. He was not violent in terms of behavior, but his work ethics were affected.”

How did your mother react?

“My mother was strong. She managed for the three of us go to college without the help of my father. But still, there were moments when I saw her crying. I understood how hurt she was. When I saw her like that, I wanted to kill my father. I actually had my father’s mobile number during my college days. I sent him text messages every day, telling him, ‘I know you can receive my text messages. Wherever you are, I can find you. I can just pay someone and have you killed.’”

How did other people respond when these things happened to you?

“My uncle, the husband of my mother’s sister, was one of the last people who had hopes for my father. He is the reason we finally got back together. He didn’t give up on my father.
“Although my mom still attended the church my father had pastored, I didn’t go back there. I jumped from church to church. I wanted to attend a church where no one knew me, so that I could focus my attention on God. I was very eager to hear an unbiased message from a preacher who didn’t know me.

“I was invited to attend a camp far from my home with my friends. The speakers came from different places and I was very sure nobody knew who I was. I wanted to go to a gathering where nobody knew me, so I could focus on myself. Everybody was praying, when a pastor came and stood beside me. He hugged me and said, ‘Even though you don’t have a father here, your heavenly Father will not abandon you, or leave you.’

“Then he continued, ‘I don’t know what your story is, but God told me to tell you to forgive him [my father].’ When that pastor touched my shoulders I felt a burning sensation throughout my body. I fell down on my knees and wept. That was the answer I was waiting for.”

What happened when you saw your father?

“Some time later, I went to the northern part of Iloilo to join our company’s relief operations for victims of Typhoon Yolanda. I was in charge of the camera documenting the event when I suddenly saw my father. That was the part of Iloilo where he was hiding. That’s where he went to restore himself because he thought that nobody wanted to accept him anymore. Basically, it turned out that we both chose to seclude ourselves to find answers for the problem that the family had.

“When I saw my father, all the hatred in my heart disappeared! I told him, ‘You’re still my father. I still love you.’ We didn’t talk too much. I just told him that I had already forgiven him. I said, ‘God never left me and the family when you were gone. God was there, and He made me stronger, and I realized a lot of things. God made me responsible for the family.’

“I told him, ‘After the relief operations, I will return to this place to spend time with you. Bring me to the community that adopted you, I want to meet them.’ My father asked me why I forgave him so fast. I told him I actually didn’t know myself. What I do know is that God healed and touched my soul.

“Forgiveness of others starts when you realize that God forgave you of all your sins. God even died for us. For this reason, how can we not forgive someone else?”

How important is the aspect of forgiveness to the restoration of relationships?

“There is no restoration without forgiveness. Forgiveness is the key to the restoration of family, friendships, and all types of broken relationships. Also, you need to forgive 100%, you can’t forgive just 90% or 70%, it’s either you forgive, or you don’t.

“The story of my father is like the story of the Prodigal Son, for my father returned. My uncle offered to let him try rehab again. My mother was skeptical, but she hoped that rehab could restore my father’s well-being and his health. So, my father went to rehab for the second time, and this time he finished it. A good thing that happened was that a lot of patients in the rehab got to know God and his power because of my father’s testimony. Slowly but surely our family started its restoration. My father even went back to church.”

After you forgave your father, did you doubt as to whether you did the right thing?”

“I was very sure that I did the right thing. In that very moment when God touched my soul at the camp, I was sure that it was just more than a sign. I had no doubts, because aside from healing for myself, the forgiveness was healing for my whole family. My mother had been really worried because she saw that hatred consumed me. At times when I rode my bike, I wanted to get into an accident. I think when hatred is in you, you have the impulse to just go and die, to end the suffering. I believe the devil waits for this kind of opportunity to attack us.”

Was it hard to reach out to your father since you were the one who was hurt?

“Based on what I told you about how God touched my soul, it wasn’t really that hard and it didn’t take a long time. When God healed my soul, all my hatred changed into excitement and I wanted to meet my father again. It’s tiring when you have anger in your heart every day.”

So now, are you at peace?

Is it possible to completely forgive?

“Yes. We can’t actually predict how mightily God will move in our problems, but He will always be effective.”

Can you encourage men who are reluctant to forgive those who have hurt them?

“First of all, forgiveness is not just for your benefit so that you will have peace of mind. It will positively affect your whole family. It is not an easy task if you have been deeply hurt. I recommend that you talk to God. God is the only one that can fully heal you, and once you have been fully healed, all your hatred will disappear. My uncle, who is a pastor, said, ‘If you become intimate with God, everything becomes clear because He is the Creator. We, his children, have been given the privilege to speak with God.’

“Even relationships that are dead can be restored. When you are intimate with God, you would understand what He is saying to you. You know that you are being enabled to extend forgiveness that you yourself cannot extend on your own apart from God’s power in you.”

Some people think that forgiveness is a sign of weakness.

“Forgiveness is a sign of strength. To be able to overcome every negative that has happened in the relationship takes a lot of strength.”

How important is Jesus in the restoration of relationships?

“He’s the only one who can restore our relationships. We never know how or when. But if we become intimate with Him, he can heal everything.”

What do you say to people who have given up on forgiveness?

“You will be haunted and it will never stop. We might think we have moved on, but we haven’t unless we extend forgiveness. There seems to be a hole inside you and no matter how you try to fill up that hole, there will always be a leak.”

Thank you for reading this special edition of Men-In-Progress. I hope you were blessed by this true story. Merry Christmas and may the love of God reign in your hearts!